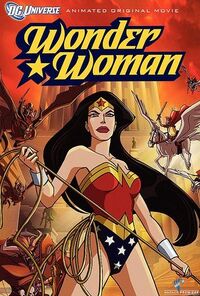 Centuries ago, the Amazons, a proud and fierce race of warrior women, led by their Queen, Hippolyta (voiced by Virginia Madsen), battled Ares (voiced by Alfred Molina), the god of war, and his army. During the battle, Hippolyta beheaded her son, Thrax (voiced by Jason Miller), whom Ares [[rape|forcibly conceived with her, who is fighting for his father. Hippolyta then defeated Ares, but Zeus (voiced by David McCallum) stopped her from delivering the death strike. Instead, Hera (voiced by Marg Helgenberger) bound his powers with magic bracers so that he was deprived of his ability to draw power from the aura of violence and death he could instigate, effectively rendering him mortal, and only another god could release him. In compensation, the Amazons were granted the island of Themyscira, where they would remain eternally youthful and isolated from Man in the course of their duty of holding Ares prisoner for all eternity. Later, Hippolyta was granted a daughter, Princess Diana (voiced by Keri Russell), whom she shaped from the sand of the Themyscirian sea shore and gave life with her own blood.

Over a millennium later, an American fighter pilot, USAF Colonel Steve Trevor (voiced by Nathan Fillion), is shot down in a dogfight and crash-lands on the island, where he soon runs afoul of the Amazon population, including the warlike, aggressive Artemis (voiced by Rosario Dawson). Steve and Diana meet and fight, and she defeats him, taking him to the Amazons. After interrogating him with the use of the Amazons' golden lasso, Hippolyta decides he is not an enemy of the Amazons and as such, tradition dictates that an emissary be tasked to ensure his safe return to his own country. Diana volunteers, but is assigned to guard Ares's cell instead since her mother argues that she has not enough experience in dealing with the dangers of the outside world. Diana defies her mother and, her face hidden by a helmet and her guard duty covered by her bookish but kind-hearted Amazon sister Alexa (voiced by Tara Strong), participates in contests of strength and wins the right to take Trevor back to his home.

In the meantime, the Amazon Persephone (voiced by Vicki Lewis), who has been gradually seduced by Ares, kills Alexa and releases him. With the additional task of capturing Ares, Diana brings Trevor to New York City, where he volunteers to help Diana on her quest. An investigation uncovers a pattern of violence created by Ares presence that will lead to him given time, and the pair go out to a bar while they wait. After some heavy drinking, Trevor makes a pass at Diana. They argue outside, but are attacked first by thugs and then the demigod Deimos (voiced by John DiMaggio). Deimos kills himself to prevent being interrogated, but Diana and Steve find a clue on his body that leads them to a concealed gateway to the underworld guarded by members of a still-extant ancient cult of Ares.

Once there, Diana attempts to subdue Ares, but he summons harpies that knock her unconscious, prompting Trevor to save her instead of stopping Ares. Meanwhile, Ares performs a sacrifice to open a gate to the Underworld where he persuades his uncle Hades (voiced by Oliver Platt) to remove the bracers, though Hades does not tell Ares that the ultimate cost of removing the bracers would be Ares' own death in combat. Later, Diana regains consciousness in a hospital and is furious that Trevor saved her rather than stop Ares. Trevor argues against her abuse with his own criticism of the Amazons' self-imposed isolation and their generalizations about men, and reveals how much he cares about her.

Ares and his army attack Washington, DC. Trevor and Diana arrive to battle Ares and are soon joined by the Amazons. While Ares manages even to summon the Amazons long dead from the Underworld to fight their own sisters, his scheme is stopped by Alexa, a member of the undead host, who reveals to Artemis a chant which nullifies Ares's control over them. The undead then turn on Ares but are destroyed by his powers. Hippolyta faces Persephone in combat and kills her, but in her dying breath, Persephone makes the queen realize that in shutting the Amazons away from the world of men, she has denied them the chance to live their lives as women.

Meanwhile, the President (voiced by Rick Overton) is influenced by Ares's power and orders a nuclear missile against Themyscira, presuming the island nation to be the source of the attack on Washington. This act of supreme aggression increases Ares's power, but Trevor takes the invisible jet and shoots down the missile just before it hits the island. Finally, after a brutal beating at Ares's hands, Diana finally outwits and kills him. Subsequently, Ares is condemned to the underworld to attend Hades as a slave alongside his son.

Later on Themyscira, in memory of Alexa, Artemis takes up the hobby of reading (with severe difficulty). Hippolyta realizes that Diana misses both the outside world and Trevor, and to make her happy again, she gives her daughter the task of being a channel for 'communication between men and women'. Diana accepts and returns to New York, where she enjoys the company of Trevor. Their relationship comes with the understanding of her larger duties, such as when Diana sees Cheetah robbing a museum and she excuses herself to stop the supervillainess as the newly christened Wonder Woman.

The film was originally advertised as having a storyline involving the Greek god Ares escaping Paradise Island in order to capture and control a mystic item called the Hand of Rage. He would then use the Hand of Rage to bring about World War III. This storyline was later dropped.

According to producer Bruce Timm, during post-production, many action scenes had to be edited after the first cut of the film received an R rating from the MPAA.

DC Comics gave out promotional light-up tiaras to those who attended the premiere of the film at WonderCon 2009.

Upon the DVD release of the film, DC Comics arranged for several promotional packaging concepts to be released through different vendors. Working together with Mattel, they created a miniature action figure of the animated Wonder Woman that was packaged together with the 2-disc DVD sets sold through Best Buy's stores. Images of the animated Wonder Woman were made into sheets of temporary tattoos and packaged with the single disc DVD of the film that were sold exclusively through Kmart's stores. FYE and Suncoast retail stores sold pre-orders of the DVD with a promotional film poster containing a printed autograph of the film's director Lauren Montgomery. The two-disc special edition DVDs sold at Target stores included bonus Wonder Woman centric episodes from the 'Justice League animated series and its spin-off  Justice League Unlimited, two shows produced by Bruce Timm. Borders Book Stores offered an exclusive "Making of Wonder Woman" booklet featuring storyboards and character designs. Finally, a lenticular cover was created for the DVD cover depicting Wonder Woman shifting her position, sold exclusively through Wal-Mart stores.

From its previews at WonderCon and New York Comic Con to its DVD release Wonder Woman received mostly positive reviews and has an 86% freshness rating at Rotten Tomatoes, based on 7 reviews. Harry Knowles gave a positive review of Wonder Woman on his website Ain't It Cool News. Knowles enthusiastically lauded director Montgomery and the surprising brutality of the action scenes.Vejvoda, Jim. Jordan Hoffman of UGO.com gave a positive review, commenting on the film's great dialogue and the mature use of post-feminist themes in relation to perceived chauvinism.Reviewing the film for Comic Book Resources, Josh Wigler gave a positive review, but criticized the unexplained inclusion of Diana's invisible plane.

The level of violence in the film – both Wonder Woman and Steve Trevor are shown killing human adversaries in several sequences, and several beheadings in battle also occur – garnered some criticism. Chris Mautner, reviewing the film for Comic Book Resources, remarked, "It is just me or does it seem more than a bit...unnecessary?".

An adaptation of the film, entitled simply Wonder Woman, was published in January 2009 by Pocket Star Books, an imprint of Simon & Schuster (ISBN 978-1-4165-9873-2). Written by S.D. Perry and Britta Dennison, the book follows the film's plot faithfully, but it omits some of the incidental violence (Wonder Woman and Steve Trevor killing guards, for example) featured in the film.